skip to main | skip to sidebar

I spent a few minutes online early this morning before heading out the door, and found Bud Parr's post on prose poetry (which definitely helped out my Monday):

A prose poem exists on its own - it is not verse with a backspace. It is deliberate, even if it's a passage from a Ralph Ellison novel or a speech by Martin Luther King Jr. However, we are still left without any way of classifying it other than the 'I knows it when I sees it' rule. At its best, prose poetry gives us a progression where ideas flow seamlessly through the paragraph, the unifying form in its “anti-form,” and gives us a speech pattern, a voice like that of blank verse that can sound natural and musical at once. Breaks between paragraphs give us more pause than those between stanzas and allow for a more conscious shift of ideas and images, beyond which there are few signals. Like “normal” poetry the affect in the end is the same; the language sears our memory while the ideas seep in from conscious and subconscious re-readings.

It made me kick myself that I didn't stash Killarney Clary's Who Whispered Near Me in with all the other books I smuggled between my clothes. Although I can't quote from it just now (damn), here's a stray bit of hers from elsewhere:

The last sure thing that night was my patent leather shoe. Darkness lifted me in his warm shirt and cold jacket. Old voices. Lighted wheel rolling on the lake. The pulse of my day lost its measure; I could feel endlessness and belong there. The lights fell and touched themselves and rose up-by motions repeated, taken and complete.

There is definitely a "language strategy" at play--one that hones the work down to a fine splinter of thought that lodges itself in your heart, pinning emotion in place.


In other poetry news, ReadySteadyBlog mentions a new book on Rilke, The Poet's Guide to Life: The Wisdome of Rilke by Ulrich Baer. Apparently, there's quite a bit of "previously untranslated material" to found within its pages.


Calling all Jane Austen fans! I'm sure you'll be as delighted as I by Laura's fascinating post at Sorrow at Sills Bend: the story of a discovery of a "new" allusion in Mansfield Park. It's a wonderful peek into the world of literary annotation and intertextual theory. (Via Amardeep at The Valve)
Posted by amcorrea at 6:52 PM

books on the nightstand

Blogging Against the Day

and back on the shelf

music in my head

“There are those who maintain that you can't demand anything of the reader. They say the reader knows nothing about art, and that if you are going to reach him, you have to be humble enough to descend to his level. This supposes that the aim of art is to teach, which it is not, or that to create anything which is simply a good-in-itself is a waste of time. Art never responds to the wish to make it democratic; it is not for everybody; it is only for those who are willing to undergo the effort needed to understand it. We hear a great deal about humility being required to lower oneself, but it requires an equal humility and a real love of the truth to raise oneself and by hard labor to acquire higher standards.” ~ Flannery O'Connor 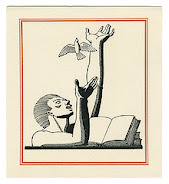